Everyone loves the original space invaders game, especially when it is free and can be played online right from your browser! 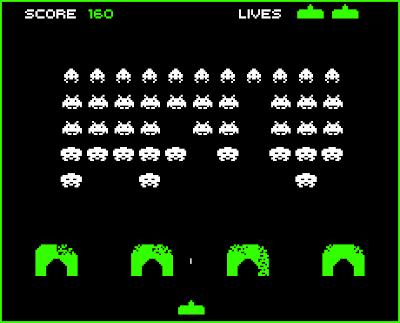 What is so great about Space Invaders?
Well, several things:

1) Nostalgia.
It is a great game that many of us played as children, and for some reason so many of the games from back in the day are actually better than modern ones today. Don't ask me why, I do not know, but that is how I and many others feel.

2) Spaceships
Do I need to say anything else? Who doesn't love shooting aliens from a spaceship being defended by barricades that are slowly deteriorating?

3) Competition with friends
We all do it. Who can get the highest max score? I used to play for hours on end just to beat my friend's score, and when I finally did, it was great. You do not need an "achievement" system to have fun, seriously.

4) Classic Space Games are simply awesome
That is all I really have to say about that.

Please let us know your thoughts and share your highscore right here on this blog! If you post a screenshot proof we will feature you right on this page as the score holder for the ZelloGames Space Invaders Award :-)

What are some other great free games to play?

At ZelloGames we offer many of the best free games available today.
We believe in a small collection of the best games, including but not limited to Neon Racer, Kamikaze Pigs, Pacman (yes, the original classic one), and especially our most featured game Empire.

Thank you for this! But I want to play more classic games

You are more than welcome, thank you for playing!
If you want any more games added to this blog, we would love to hear it! In fact, we respond to every single request personally and if we can make it happen, then we will provide you with the game that you want! No guarantees, but we will do our best.
As long as the game is free and licensed to be used then we can make it work.

In our recent blog post we spoke about strategy games and recommended Empire, which in our opinion is the top game today.
The fact that it is free and browser based only makes it that much better.

So what is it about medieval strategy games that make them so appealing?

The Castle
Lets be realistic here, who wouldn't LOVE living in a castle? Everyone secretly wants to be a king and rule their own castle and city, with city walls and a large gate, a moat covering all four sides, and armed troops protecting the kingdom

Tell me that this isn't awesome: 2. The idea of conquest

The ability to grow in strength and expand your presence and influence is appealing to anyone who has a competitive spirit. Imagine conquering the lands of your enemies and taking their land after winning a medieval battle - there is a level of appeal here that you can't really get with other types of games

3. Of course, the strategy component itself!

Making strategic decisions that lead you to victory or to failure and the ability to observe as the events unfold - for the good and the bad - after being forced to make important decisions.
And yes, even lack of decision making is a decision that has consequences in Empire
Posted by Unknown at 18:52 No comments:

The Best Online Strategy Games - A review by ZelloGames

The Best Online Strategy Games
What are they? And where are they hiding?

A contemporary issue today is that most games, quite frankly, just suck. Especially strategy games, anywhere from turn based strategy to real time strategy and browser based RPG games.

Just remember all the games from a decade ago and how fun they were. Can you honestly find a game that is as fun to play as Age of Empires was? It is very rare nowadays, and that has made me quite upset.

I nearly lost hope trying to find a strategy game that I would enjoy, but then I found it: Empire.

The Solution - Empire Online! Click to Play the Best Online Strategy Games link below to try it out :D


If any game deserves to be among the list of the best online strategy games, it is this one.
Why, you ask?

Let me tell you what you can do in Empire that you can't do in many other games today. You can be powerful. That's right - so many games out there limit you in terms of what you can do.
Want to attack other players? no problem! Want to pillage their resources, steal their goods, and set them on fire? You can do that as well.

But what really sets is apart from the other browser based games that let you do the same thing is the fact that despite its simplicity on the surface, it is actually an extremely realistic simulation of the medieval kingdom times!

What do I mean?
I mean that if you were to truly get into this long-term strategy game, you would realize the importance of player interaction and get a feel for what castle lords used to deal with back in the medieval ages. Sounds cheesy? initially it might sound like it, but think about it:

You are the lord of one castle trying to expand. There are THOUSANDS of players around.
You can choose to compete and fight them alone, but they might group up and forge an alliance against you - and then you are in trouble. Why are you in trouble? because players can cause real damage in Empire and really set you back if they consistently attack you. On the other hand, successful attacks against other players are extremely rewarding.
So then what do you do, forge an alliance of kings around you? Build an alliance of your own and create diplomatic pacts?
That might be the answer, but what happens if your ally needs your men in battle, and you don't have that many to spare? If you barely have enough to defend your own castle, and you send them out to war to fight for someone else leaving you completely defenseless? Is there any guarantee that your ally will back you up when YOU will be the one in need?

That was just one simple example of so many scenarios, many for which the complexity of the diplomacy and consequences of your actions have so much more depth to them.

So to TL;DR, why is Empire the best?

Because your decisions affect your gameplay significantly. If you are a wise King, there is no limit to the amount of power you can have. They say that every empire falls - now is your challenge to prove them wrong!

You can play Empire at http://OpinionOwl.com for free.

At ZelloGames we offer many free games, and we have decided to expand our presence to Blogger as well!

What can you find on ZelloGames?
Primarily free browser based games.

One of the top feature games that we have is empire, the most unique castle game around!
We find that too many websites give you too much hassle with registrations, surveys, navigation, etc...
At ZelloGames we aim to change that. We like Simplicity, and that is what we do.
Empire is essentially a PvP'ers dream - it is a combination of a Strategy game like Age of Empires, a diplomacy role-playing game, while at the same time being a hardcore Open World PvP MMORPG.

You start with a small castle and expand it over time, fortifying its walls, increasing its production capabilities and stationing a large army and population. You can then wreck other players, pillage other players, and destroy everything they have. Or you can play it more farmville style. That is completely up to you!

We will be featuring many more games in the future, so stay tuned! and Enjoy your stay!